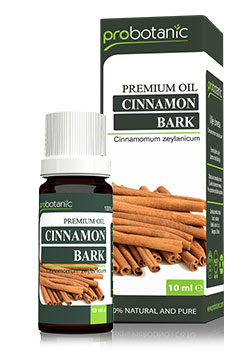 Purpose: Helps in maintaining normal values of lipids and sugar in the blood. It supports healthy skin and mucous membrane.

The product is not recommended for pregnant and breastfeeding mothers, children under the age of 18. The product may not be used by person allergic on cinnamon or Balm, in cases of unknown fiver, severe liver damage, active stomach or duodenal ulcer. Person taking hypoglycaemic drugs need to be under doctor’s supervision if they want to use this product because it can cause a rapid drop of sugar in the blood. Patients suffering from liver diseases, alcoholism or persons using paracetamol, are advised to avoid oral application of cinnamon bark oil. When applied on the skin, it may cause allergic reaction, due to which it is not recommended for children and older persons. Potential side effects – vomiting and diarrhoea in case of taking excessive amount.Do not exceed the recommended dose.

The product is not substitute for a varied and balanced diet. Before use, read the instructions carefully.

Keep the product in a dry and dark place, at room temperature, out of reach of children.

Lot number and expiry date are marked on the package of the product.

One of the favourite winter spices, today cinnamon is highly ranked in cooking, due to its aroma and exotic taste. The Bible mentions the use of cinnamon by Egyptian, Greek and Roman people, whereas the Asian cultures have used it for centuries in medical purposes.

Today, cinnamon is mostly produced in its native countries : Sri Lanka, Madagascar, Vietnam, India and China. Na There are between 50 and 250 types of cinnamon, however, there are two types of cinnamon mostly present at the market:

The true cinnamon comes from Sri Lanka (Ceylon) and it has yellow-brown colour. This type of cinnamon has got more gentle and sweet aroma. Ceylon cinnamon barks have multiple thin layers of crust and they are easy to ground due to which it differs from cassia.

Cassia, also known as Chinese cinnamon is type of cinnamon often found in shops, it has sharper aroma, stronger taste and lower price. It is mostly used in the food industry because it is more resistant and easier to grow. Cassia barks are hard and have one thicker layer of crust and cannot be ground easily unless previously cut into smaller pieces.

Active component of essential oil of both types of cinnamon is cinnamaldehyde, which is responsible for lowering the lever of sugar and lipids in the blood

Why is Ceylon cinnamon safer and has better quality?

Coumarin is chemical compound which gives fragrance to plants and it is a natural ingredient of many plants. It has a sweet fragrance, which can be easily recognized as the fragrance of freshly cut hay. More coumarin means stronger aroma and hot taste due to which it was used as aroma enhancer in tobacco and some alcoholic drinks until it was prohibited to use it for the said purposes.