Origano Derm is a unique cream with organic oregano oil. 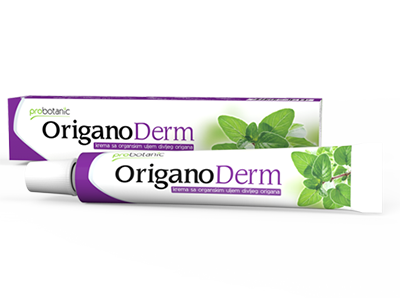 At the Institute for Biological Research “Siniša Stankovic” in Belgrade, Origano Derm cream was compared with the most commonly used local antibiotics and antimycotics. The results of the study were impressive and showed strong antibacterial and antifungal effect of Origano derm cream on the following microorganisms:

The results confirmed that Origano Derm has bacteriostatic and bactericidal properties, and also it inhibited and prevented further growth of the examined Gram (-) and Gram (+) bacteria. Origano Derm cream has acted even on the most resistant bacteria, among them the methicillin-resistant S. aureus (MRSA), which is considered one of the most resistant bacteria. Tested antimycotics showed better inhibitory activity than the cream, while higher concentration of the cream completely stopped the growth of the tested fungi.

Streptococcus pyogenes (pyogenic streptococci) or beta-haemolytic streptococcus group A is a gram-positive bacterium and is one of the most important bacterial pathogens that causes various diseases in humans. In addition to numerous inflammatory diseases of the throat, ear, lung, kidney and brain, pyogenic streptococci often causes purulent infections of the skin and subcutaneous tissue.

Staphylococcus aureus or golden staphylococci is one of the most widespread and most prominent gram-positive, aerobic bacteria. What makes this bacterium unique is numerous antibiotic resistance mechanisms. Namely, the bacteria has created numerous ways to protect against the action of antibiotics, which creates problems in treating the infections it causes. As a rule, it causes skin infections and, in addition, inflammation of the nose, throat, ears, sinuses, pneumonia, endocarditis and osteomyelitis. Skin infections are the most common forms of staphylococcal disease. Superficial infections can be diffuse, with vesicular pustules and cerebral (impetigo) or focal and nodular (furuncle and carbuncle). Skin abscesses are frequent and deeper. Staphylococci often cause infections of wounds and burns, postoperative infections of the surgical wounds, and also mastitis or breast disorders.

Candida is a fungus that can be present in the mouth, throat, tongue, nose, bronchi, lungs, digestive tract, genitourinary tract, skin, nails and can be generalized in the form of systemic candidiasis. For these reasons, the symptoms are numerous and varied. Candidiasis of skin is most commonly seen in newborn babies, in adults with large folds (in obese subjects) and under the breasts in women. The changes are in the form of clearly limited, red, damp slabs on whose surfaces bubbles and slurries are seen. Candidiasis of the skin can also occur between the fingers, in the form of redness, whitish deposits and wetting. Changes on hands are more common with housewives, delicacies and people who often work with their hands in the water.

Dermatomycoses are skin, hair and nail infections caused by dermatophytes, the most common fungi of the genus Microsporum, Trichophyton and Epidermophyton. More often in people with reduced resistance to the organism, either due to chronic illness or accompanying treatment (immunosuppressive, antibiotic therapy, cytostatics, AIDS / HIV, etc.).

Tinea capitis is a superficial dermatomycosis or fungal disease of the scalp and in the adult population of the beard. It occurs primarily in children from 6 to 10 years old, and rarely in adults. The most commonly causer is Microsporum canis (the source is usually infected cat or dog) or Trichophyton dermatophytes (the source is usually infected cattle).

Tinea pedis et manus (dermatomycosis of the feet and the fist) is a fungal infection characterized by itching, peeling, cracking and redness of the skin, as well as the appearance of bubbles between the fingers of the arm and the leg. The most common cause is Trichophyton. The disease is relatively frequent and the occurrence is favorable for the wearing of inadequate footwear, increased sweating of the hands and feet, the use of common hygienic rooms (showers and sports lockers). As tinea pedis is common among athletes, it is rightly called the “athletes foot”.