This miraculous plant, about which even Muhammad said that it could cure everything but death, has nowadays been fully used. It has been used for medical purposes and as food supplement, for ages. 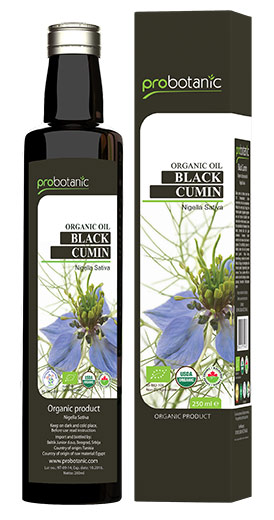 One of the most famous plants in the history of medicine lately called “modern panacea” is the black cumin (Nigella sativa). This is a flowering plant from the family of Ranunculaceae, which comes from the South-West Asia. Black cumin seeds were found in the tomb of famous pharaoh Tutankhamun, and the oil was used for treating various health problems even by ancient civilizations, for stabilizing the immune system, for fighting asthma, digestion problems, cold, headache, toothache, for relieving breathing difficulties and against various infections.

Scientific studies, initiated about half a century ago, resulted in discovery of more than one hundred chemical components but also incredible medical properties of the black cumin seeds and its oil. Black cumin oil is rich in unsaturated and essential fatty acids. It mostly contains linoleic and oleic acid, including palmitoleic and linolenic acid. Predominant active components in the black cumin oil are terpenes and terpenoids. The most efficient is nigelon, which relaxes the muscles, expands bronchi and reduces viscosity of bronchial secretion, and timohinon with its anti-inflammatory and analgesic effects which lowers the level of oxidative stress in the body caused by the effect of free radicals. It contains vitamin B complex, vitamin A, C, E, potassium, sodium, calcium, zinc, selenium, iron, folic acid, and essential amino acids.

In the year of 1996 the U.S Federal Food and Drug Administration approved the use of black cumin oil for boosting the body’s immune system.

Since black cumin oil comes from the East, in 2003 doctors in Saudi Arabia tried to define its pharmacological and toxicological properties. The scientists proved that black cumin oil lowers high blood pressure, improves blood circulation and decreases level of cholesterol and glucose in blood.

Studies of active components in black cumin are rather significant and we are sharing them here with you.

Black cumin and new methods in treatment of follicular lymphoma.

It is scientifically proven that black cumin reduces sugar level in patients with diabetes mellitus type 2.

Effectiveness of black cumin in treatment of obesity in metabolic syndrome patients.

Gastroprotective activity of black cumin oil and its component – timokinon, in alcohol-related damage to gastric mucosa.

A comparative study on fatty acid composition of black cumin obtained from different regions of Turkey, Iran and Syria.